Florida State University’s international programs celebrate 60+ years of connecting students interested in new cultural experiences and a brand new learning environment. Within the program today, students can choose from more than 20 locations, ranging from Panama to China and everywhere in between. Those who are interested in studying abroad, are offered a flexible schedule, allowing them to choose any semester that best suits them so they do not have miss out on the opportunity due to timing. Within Heritage & University Archives, we house the original documents creating the organization, includes the creation and original operation of the international programs.

On August 1, 1966, a group of 120 students from Florida State University traveled to Florence to embark on their cultural adventure for a total of eight months. On November 4, 1966, the Arno River, located in Florence, reached a frightening elevation and eventually surpassed the embankment. This flooded the city, causing damages and causalities and causing the journey for the Florida State students to take a turn for the worst. Florence was covered in mud. Relief efforts by volunteers, known as “mud angels,” were underway to help the residents of Florence. Among these mud angels were the Florida State students, helping preserve invaluable artifacts and manuscripts. Despite relief efforts, Florida State students and faculty were eventually relocated to Rome for the health risks became overwhelming.

Their efforts to aid the city of Florence were recognized by both the cities of Rome and Florence and were even thanked by Pope Paul VI. Currently, Heritage & University Archives is hosting an exhibit about the students who went to Florence in 1966 and became part of the relief effort. The exhibit is located in the Mary Lou Norwood Reading Room, open Monday through Friday from 10 a.m. to 6 p.m and available to the general public.

For more information on the Arno River Flood of 1966 and the students who participated in the relief efforts of Florence, please click here.

Established in 1966 by former Florida Supreme Court Justice B.K. Roberts, Florida State University’s College of Law has contributed many notable individuals to the law community, such as current Florida House of Representatives Majority Leader Adam Hasner and current Senior Judge for the United States Air Force, W. Thomas Cumbie. A scrapbook documenting the planning of the school is located in Special Collections & Archives.

“Sandy has helped shape Florida State’s identity as a university that not only educates students, but develops good citizens who contribute to society in meaningful ways. He has spent his whole life trying to make this world a better place.”

The exhibit created for the unveiling of the window is still on display within the Heritage Museum. The exhibit and the window are open to the public for viewing, Monday through Thursday from 10 a.m. to 4 p.m. EST.

The article documenting the unveiling of the window can be found by clicking here.

Paul Dirac was an English theoretical physicist who provided remarkable insight towards the development of quantum mechanics and quantum electrodynamics. His discoveries led to him now being famously known as the father of modern physics and a Nobel Prize Winner. These discoveries constitute his own formula, known as the Dirac Equation, to describe the behavior of fermions, which are subatomic particles, and predicted the existence of antimatter, which are corresponding particles of ordinary matter.

His contribution to the study of physics and society is commemorated on this day, the day of his death, in 1984 at the age of 82. On October 19th, the day before the anniversary of his death, several librarians and students from the physics department go out and clean his headstone at Roselawn Cemetery and plant flowers to honor the man who spent his last decade at Florida State University teaching physics students and conducting further research.

The FSU Special Collections & Archives houses The Paul A.M. Dirac Papers that consists of correspondence, books, manuscripts of scientific papers, calculations, photographs, framed certificates, and realia. A window is even dedicated to Paul Dirac within the Heritage Museum located in Dodd Hall, to remember his work and honor his footprint within physics.

The College of Nursing at Florida State University has a significant history. Recently, Heritage & University Archives received a new accession from the College that illustrates when the College played a key role in being prepared for a nuclear catastrophe on American soil.

The newspaper clipping presented is from the spring of 1961, describing a “disaster drill” in an event of a plane crash and was given to the College by alumna Judith Butler White. White writes that this article describes the beginning of the implementation of the “worst-case scenario” preparation instated by President John F. Kennedy during the Cold War and that the Florida State University nursing students were part of this preparation plan. She recalls that a “Radiation Sign” and a “Location of Campus Assignment” in case of a nuclear disaster, was always hanging on her door in her room in Dorman Hall.

In October 1962, President Kennedy was informed by aircraft spies that Soviet nuclear missiles were placed within Cuba, sparking the Cuban Missile Crisis. Not only were crisis plans in an event of a nuclear disaster methodically and rapidly developed, the nursing students in the state of Florida were being trained within their programs for emergency care in an event of a nuclear attack within Florida.

Although most of America views the Cuban Missile Crisis as a tragedy that never occurred, White stated that the reality of a nuclear attack was very much a possibility and the State of Florida would have actual drills for its nursing students to aid the masses of victims if such a crisis did occur. In the article, it refers to nursing students collaborating in a “disaster drill” for a plane crash, when in reality they were being prepped for the first nuclear war that the world had ever experienced. 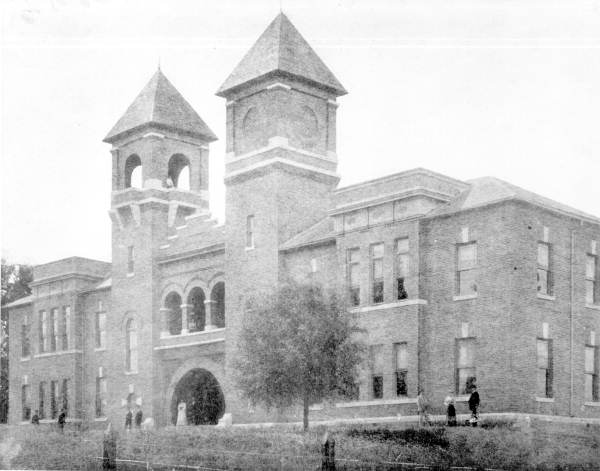 However, in 1910, because “College hall” was deemed structurally unsafe, it was knocked down and rebuilt into the administration building we know today and named “Florida State College’s Administration building” until 1936, where it was named after James D. Westcott, Jr. Westcott was a former student and Florida Supreme Court justice who left a large sum of his estate to the university and declared that the profits only be used towards teacher’s salaries. 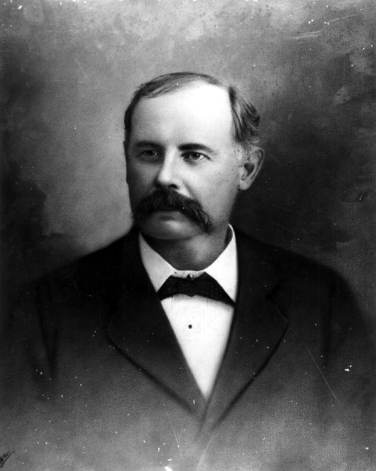 In 1969, the Westcott administration building suffered severe interior damage, due to a fire. Although much of the interior was destroyed, the university was able to preserve the original collegiate gothic exterior that we know today. Renovations on the building were not completed until 1973 and Westcott is now deemed as an exemplary element of the university. 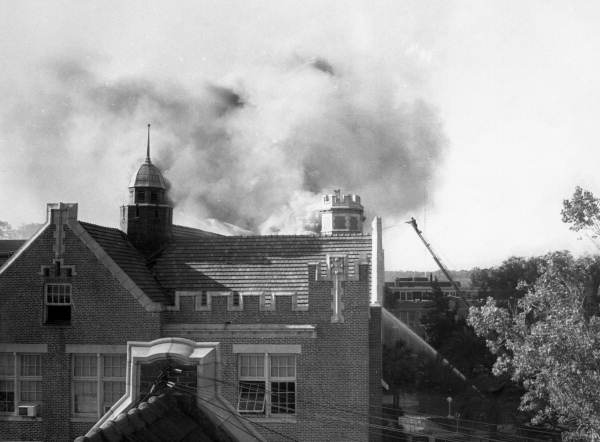 During the years of the Florida State College for Women (FSCW), football was unfortunately disregarded and substituted with other tradition and intramural teams. A physical education program was developed and supervised by Katherine Montgomery, a former FSCW student graduating in 1918, returned to start her campaign for a physical education program at FSCW. This program included volleyball, gymnastics, and various other athletic clubs that pushed the boundaries for women in sports in an age where it was widely deemed unlikely. 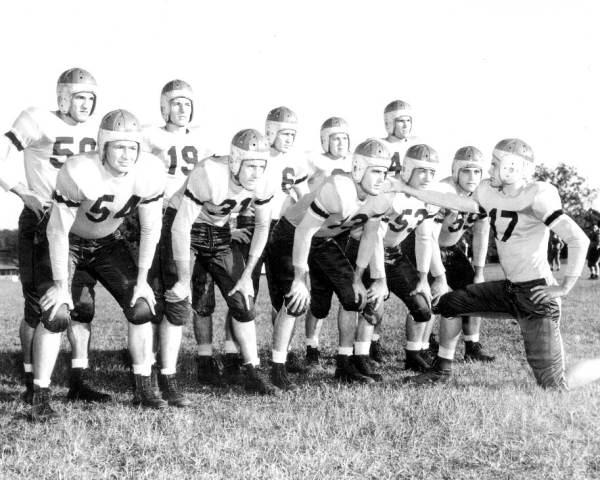 George Milton, a former anthropology professor here at Florida State University, was well-known not only for his southern charm but also his unique expression through his artwork. During the late 1930’s, Milton was stationed in the Washington D.C. area during his career in the Air Force in World War II and then studied painting at the prestigious Corcoran School of Art after the war. He then furthered his education by receiving a master’s degree in painting and art history from Florida State. 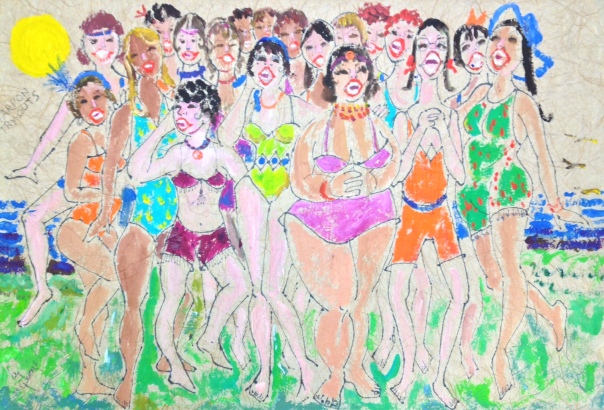 From a recent donor, the Heritage & University Archives was presented with an original painting from Milton on his impression of the Tarpon Club Tryouts. His dedication to his practice of art was emphasized when he wrote, “a painting is a record of an individual’s personal and vicarious experiences and sensations which he records symbolically and representatively through such media as line, color, form, and texture as they are guided by his conscious and subconscious mind.”

For more information on FSU’s Tarpon Club check out our collection here:
http://fsuarchon.fcla.edu/?p=collections/findingaid&id=3775&q=&rootcontentid=124921

There are also videos and photographs in Diginole:
http://fsu.digital.flvc.org/islandora/object/fsu%3Ahpmain