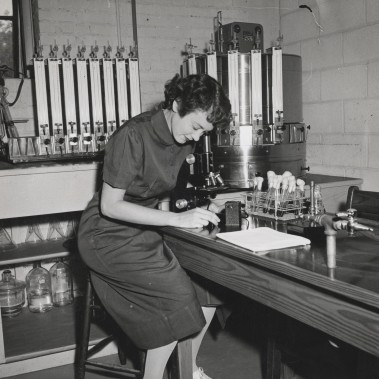 The Florida State University Heritage Museum exhibit Degrees of Discovery examines the history of science at Florida State, tracking the school’s development from early educational institution to twenty-first century research facility. Since the late nineteenth century, science has served as a fundamental aspect of education at Florida State University and its predecessors. After World War II, a surplus of wartime laboratory equipment and veterans allowed FSU to meet the increasing demand for science education across the country. Early programs focusing on physical sciences laid the groundwork for the development of advanced courses in a variety of fields, including meteorology, oceanography, chemistry, and physics. The creation of innovative research facilities offered new avenues for interdisciplinary collaboration and continues to encourage scientists from around the world to take advantage of the advanced technologies offered on and around the Tallahassee campus.

The process of creating this exhibit included extensive research into both the history of the University and scientific trends throughout the past century. Though Heritage Protocol & University Archives contains a wide array of scientific photographs from the 1950s and 60s, locating a variety of primary source material to tell a cohesive narrative was a challenge. In addition, as a literature student, my scientific knowledge was sorely lacking. In order to contextualize FSU’s developments, I interviewed faculty and current students involved in the sciences to gain a wider understanding of practice and principle. Research also involved reading transcripts of oral histories, scanning negatives from laboratory photo sessions, tracking the development of honor societies, and comparing a century’s worth of course catalogs to determine how science education changed over time.

Another challenge of working with such a broad subject was that relevant items were spread throughout the collections of both HPUA and Special Collections. A newsletter published by the 1973 Speleological Society was tucked away in the Archives, for example, while a postcard donated by two alumni offered an early look at the Science Hall. Perhaps one of the most interesting finds was a set of hand-crafted lab equipment from the 1960s; as part of a chemistry class, students were responsible for creating their own glass stirring rods and tube connectors. During this time period, glassblowers on campus would even create unique, made-to-order equipment for scientists who needed a particular shape or style of instrument.

The practical side of installing the exhibit, however, limited some of our object selections. Because we cannot regulate the natural light from the large, albeit beautiful, stained glass windows in the Heritage Museum, older photographs were digitally reproduced and mounted to avoid damaging the original items. Adhering images to foam board for support and cutting them down to size was more difficult than I anticipated – straight lines and I clearly don’t get along – but with the help of the Archives Assistant, the resulting photos offered an impressive visual timeline of the school’s scientific evolution. Curating this exhibit was an incredible learning process about creative design, museum principles, and even some scientific facts. Degrees of Discovery offers visitors a glimpse into the ever-changing world of science while reminding us that the basis of discovery – curiosity, inquiry, and creativity – will always be a part of human nature.

Degrees of Discovery: The History of Science at Florida State will be on display in the Heritage Museum in Dodd Hall beginning in mid-April. The museum is open Monday-Thursday, 11AM to 4PM. An online exhibit with additional content will follow.