Serious drama began unfolding in October 1972 in the lead up to Florida State University’s homecoming week. As reported in the Florida Flambeau, students had an unconventional choice for Homecoming Queen: Ron Shank. 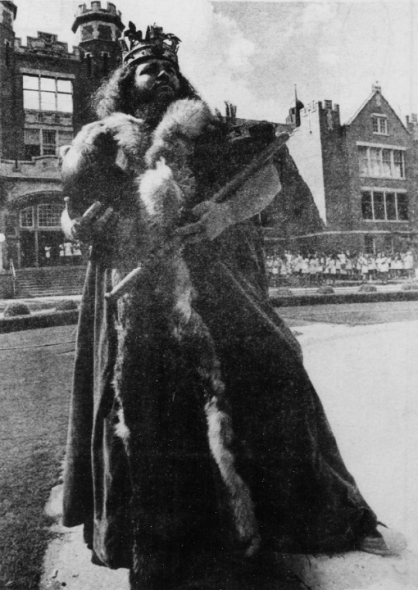 Mr. Shank’s candidacy for homecoming queen stirred up plenty of controversy. Administrators balked. Rallies were held in his support. Lawyers were consulted. In response to Homecoming Committee chair Dr. Marshall Hamilton’s comments that Shank was destroying the dignity of Homecoming, an commentor wrote:

On the contrary, Dr. Hamilton, we think Ron might enhance the dignity of Homecoming. He certainly appeared dignified in the picture in yesterday’s Flambeau. Such pomp and outright elan–if you will–certainly couldn’t harm the ceremony.

One person even wrote in to express his fears of a racist conspiracy being afoot; Mr. Shank merely being used as an excuse to cancel the entire homecoming court, which had had African-American Queens the previous two years.

Conspiracy or no, that’s exactly what happened. The Homecoming Committee declined to have a Homecoming court for the year of 1972, and University President Stanley Marshall elected to not get involved.

Let’s close with some words from the man himself:

I ran for Homecoming Queen because I don’t believe in parading Women (or Men) around on a stage under the auspices of a beauty contest when physical beauty is only a minor part of a person’s true beauty and definitely not the sole criteria of one’s worth.

Read all about the controversy in the Florida Flambeau in the DigiNole: Digital Library.

Like Loading...
Amidst all of Homecoming Week’s non-stop events, one doesn’t have time to think about the festivities of the past and their influence on the present.  FSU’s first Homecoming, celebrated over the weekend of December 3-4, 1948, boasted concerts, dances and dinners held by various organizations, skit night, Pow Wow, and a football game for students and alumni alike to enjoy. Many of FSU’s greatest traditions started at the 1948 Homecoming.
Friday’s Homecoming events started with a continuation of an older tradition from FSCW by hosting an Odd-Even Archery event. Men weren’t excluded from the fun, and competed in an intramural volleyball match. Festivities continued with an Odd-Even modern dance, Garnet and Gold Key Banquet, a Tarpon Club exhibition, with Friday’s activities culminating in the first annual Pow Wow. Pow Wow, now a concert featuring popular comedians and performances by various student groups, used to be held at Centennial Field (now the location of Cascades Park). The Pow Wow program consisted of skits and performances by students, speeches by the President and Master of Ceremonies, and concluded with a “pyrotechnics show.”

Saturday was packed full of activities for students and alumni to attend. Starting with breakfast and followed by campus tours, visitors were able to view the newest buildings on campus (including the new music building, the first building on campus to have air conditioning), as well as see the entries in the House Decorating Competition. In the afternoon, students held a parade from campus to centennial Field, just in time to catch the game against the University of Tampa Spartans. The first Homecoming game set the precedent of the Seminoles winning bowl games. Homecoming coincided with the first bow game of the newly reorganized Dixie conference. The Seminoles finished their second season by trouncing the University of Tampa Spartans with a 33-12 victory.

After the game, students reconvened on campus for a dance that featured Hal McIntyre and his 15-piece Metro-Goldwyn-Mayer Orchestra. Formerly a saxophonist for Benny Goodman and later the Glenn Miller Orchestra, Hal McIntyre toured over seas and around America during the mid-century. FSU students and alumni were excited welcome him and his band to campus. At the dance, students chose their new Homecoming Queen. Whittled down from an original 32 Homecoming hopefuls, 5 finalists were rated on an applause-meter, and junior Clara Moffat Howell was chosen to reign supreme.
To see more photographs, ephemera, and artifacts related to the history of Florida State, check out the FSU Heritage Protocol Digital Collections or like the Heritage Protocol Facebook page.