While this blog serves as a running feature of highlights from Special Collections & Archives, our newest exhibit makes the materials we talk about online available for the public to see in person. Illuminations the exhibit features items from our manuscript and rare books collections, Heritage & University Archives, and the Claude Pepper Library. Come and see new acquisitions like the Joseph Tobias Papers, Pride Student Union Records, Marsha Gontarski Children’s Literature Collection, and more.

Illuminations: Highlights from Special Collections & Archives will be on display through the fall semester in Strozier Library’s first floor exhibit space Monday-Friday 10am to 6pm.

The History of Sixteen Wonderful Old Women, Illustrated by As Many Engravings; Exhibiting Their Principal Eccentricities and Amusements (1820) was recently added to the John MacKay Shaw Collection of Childhood in Poetry. It was published in London by prominent children’s publisher John Harris as part of “Harris’s Cabinet of Amusement and Instruction.” These little books, “printed in a superior manner upon good paper,” sold for 1 shilling and 6 pence, which made them significantly pricier than other chapbooks on the market. There are three other titles from Harris’s Cabinet of Amusement and Instruction available in the Shaw Collection: 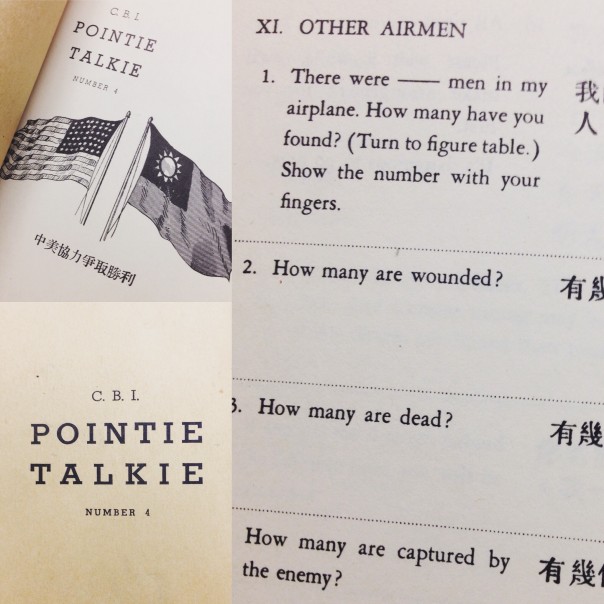 The C.B.I. Pointie Talkie Number 4 is a fascinating phrase book issued by the US Army Air Force for airmen in the China Burma India Theater in World War II. Containing sections in Chinese, Burmese, French, Annamese, Thai (Siamese), Shan, Lolo, and Lao, the book offers phrases for airmen to point at when trying to communicate with locals. The phrases range from basics like “Where is the latrine?” to pointed questions that reveal the fears and suspicions American soldiers were likely to have in a war zone, such as “Are there any spies around here?” The Pointie Talkie has recently been added to our rare book collections alongside a 1944 Japanese Phrase Book issued by the War Department. 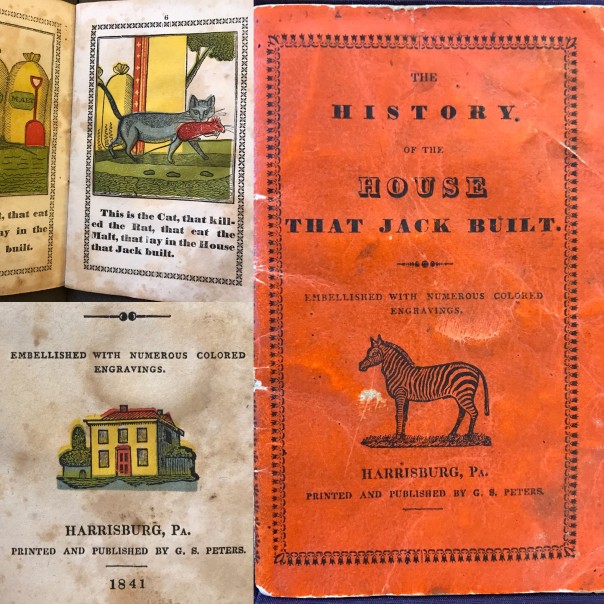 FSU Special Collections & Archives is pleased to add a new chapbook to the John MacKay Shaw Collection of Childhood in Poetry. The History of the House That Jack Built is a popular nursery rhyme told as a cumulative narrative. Starting with “This is the House that Jack built,” each verse adds on to the previous one, creating a delightfully nonsensical, rhyming story. This edition was printed in 1841 by Gustav S. Peters, a notable printer of broadsides who often catered to the German-speaking population of Harrisburg, Pennsylvania and its environs. While many cheaply printed books of the time were colored by hand, if at all, Peters was one of the first printers in America to make color printing commercially viable (even if, as seen above, his colored printing blocks didn’t always register perfectly). This edition printed by Peters is one of several versions of The House That Jack Built that can be found in the Shaw Collection.

Although Paul Laurence Dunbar was only 33 years old when he died of tuberculosis on February 9, 1906, he left behind a lasting legacy of poems, short stories, and novels. The eldest son of former Kentucky slaves, Dunbar published his first poems in his hometown newspaper at the age of sixteen. His first collection of poetry, Oak and Ivy, was published in 1893. While much of his poetry was written in traditional English verse, Dunbar achieved widespread popularity for writing in African American vernacular dialect. Several volumes of Dunbar’s poetry like Poems of Cabin and Field (1899), Candle-Lightin’ Time (1901), When Malindy Sings (1903), and Li’l’ Gal (1904), shown here, featured full-page, black-and-white photographs taken by the Hampton Institute Camera Club, with whom Dunbar frequently collaborated to illustrate his verse. The hundreds of photographs in these books have significant cultural value as representations of rural African American life at the beginning of the twentieth century.

Several volumes of Dunbar’s poetry are included in the John MacKay Shaw Collection of Childhood in Poetry. In his short life, Dunbar spoke with passion, humor, and elegance of the human experience, inspiring later writers such as Maya Angelou, who titled her autobiography after lines from Dunbar’s poem Sympathy:

The Posthumous Papers of the Pickwick Club, Charles Dicken’s first novel, was published in installments by Chapman and Hall from March 1836 to November 1837. There were 20 parts issued in 19 volumes for a shilling each with 43 engraved plates. The first two parts were illustrated by Robert Seymour, who originally pitched the project to Chapman and Hall as a series of sporting sketches with accompanying commentary. But once Dickens – then known by his pen-nickname “Boz” – came on board the project, Seymour’s role was diminished. Dickens was notoriously hard on his illustrators. On April 20, 1836, Seymour committed suicide. R. W. Buss was brought on board to provide illustrations for the third part, but he was quickly replaced by H. K. “Phiz” Browne, who illustrated the remaining parts and went on to work with Dickens for many more years.

While certainly not the first novel to be published in serialized parts, the Pickwick Club was the first to “go viral,” especially after the introduction of the beloved character Sam Weller. The final double installment of parts 19 and 20 was printed in a run of 40,000, an incredible increase from the 1,000 copies printed for the first part. FSU Special Collections & Archives has recently acquired a complete set of parts of the Pickwick Club in their original wrappers. Parts 9-10 and 12-20 include The Pickwick Advertiser, which are a treasure trove of Victorian era advertisements for everything from toothache remedies to easy chairs. Parts 14 and 19-20 include an additional tipped in catalog for Mech’s cutlery.

These serialized parts nicely complement FSU Special Collections’ copy of the first single-volume edition of the Pickwick Club, printed from stereotypes of the original parts in 1837. FSU’s copy includes a binder’s ticket from “Alexander Miller, Bookseller, Port Street, Stirling” on the lower left-hand corner of the back pastedown. There is evidence of a bookseller named Alexander Miller active in Stirling, Scotland in 1852 and 1865-6. Indeed, ready-bound versions of popular works like the Pickwick Club would have been commonly available for purchase in bookshops like Miller’s in the middle of the nineteenth century. Stop by the Special Collections Research Center soon to look at these and other editions of Dickens’ works!

In addition to our three newest medieval facsimiles, Special Collections & Archives has recently acquired a high-quality facsimile of the Bedford Book of Hours.

The Bedford Book of Hours is a lavishly-illustrated early fifteenth century French prayer book made for John, Duke of Bedford, and his wife, Anne of Burgundy. Anne later gave the book to her nine-year-old nephew, Henry VI, as Christmas present. The original manuscript is now in the British Library (Add. MSS 18850). The illustrations were produced in Paris in the workshop of an unnamed artist known to art historians as the “Bedford Master.” The Bedford Book of Hours exemplifies the type of high-end manuscripts produced in secular bookmaking shops for European nobility in the late Middle Ages.

More information about the Bedford Book of Hours and other medieval facsimiles can be found on the Facsimiles of Medieval Manuscripts and Incunabula Research Guide.

When “Ten Episodes from Naked Lunch” first appeared in The Chicago Review, public outrage over obscenity caused the University of Chicago to suppress its publication. In response, Chicago Review editor Irving Rosenthal founded a new literary journal called Big Table, whose inaugural issue included a reprint of the ten episodes from William S. Burrough’s novel-in-progress. The completed novel was first published in Paris by Olympia Press in 1959.

FSU Special Collections & Archives is pleased to announce we have recently added Big Table I and the first edition, first printing, second issue of the Olympia Press Naked Lunch to the Gontarski Grove Press Collection. These two new editions strengthen our holdings in William S. Burroughs, which include the first US printing of Naked Lunch by the Grove Press, as well as important Burroughs literary manuscripts and correspondence in the Francois Bucher Papers.

FSU Special Collections & Archives is pleased to announce that a number of new artists’ books have been cataloged and are now available through our Research Center Reading Room.

For a list of these and other artists’ books in FSU Special Collections, visit the Artists’ Books Research Guide.

Like Loading...
FSU Special Collections & Archives is pleased to announce that three new, high-quality facsimiles have been added to our rare books collections and are ready for use in our Research Center Reading Room.

Visit our Facsimiles of Medieval Manuscripts and Incunabula LibGuide for more information on these and other facsimiles in our collection.