This is a guest-post by students Josalin Hughes and Julia Kleser, Editing, Writing, and Media majors, whose project for their Advanced Writing and Editing course this semester is to help create content highlighting portions of Special Collections holdings.

As we progress from the otherworldly and spooky atmosphere of October and deeper into the holiday spirit of November, it can be hard to let go of Halloween. After all, the exciting and haunting energy has been building since the first of the month. We hope everyone had a happy Halloween and want to introduce the work of an author near and dear to our hearts. Edward Gorey was a curious character who created spectacular—or spooktacular, rather, to stay in-season—books for children. Although not gory, as his name may suggest, some readers describe his art as “unnerving” or “creepy.” Marsha Gontarski, the researcher who compiled and donated the entire Marsha GontarskiChildren’s Literature Collection, refers to his style as “subtle and unsettling.”

One of the most well-known works, and perhaps most suitable for this recently passed holiday, is The Gashlycrumb Tinies which you can find in the Marsha Gontarski Collection. As pictured below, the poem takes on the form of a traditional alphabet-style book. Where Gorey’s version differs though, is the somewhat disturbing subject matter of each letter; from Amy to Zillah, each letter names a child who dies in a tragic, absurdor nonsensical way.

The darker tone of the poem bleeds in through the images that accompany the single-line deaths. Each illustration is inked in heavy, purposeful strokes in all black. Without the variation of color, his style relies on different textures and contrast to tell each morbid tale.

Even outside of The Gashlycrumb Tinies, Gorey’s other work carries this same eerie quality, one which inspired well-liked artists such as Tim Burton. Taken from his 1984 engagement calendar, An Edward Gorey Bestiary, are a few illustrations that mirror the unsettling style seen in The Gashlycrumb Tinies, with some splashes of color. Although his style may vary to include a more clean and colorful appearance, the stories he tells remain a little ghastly. 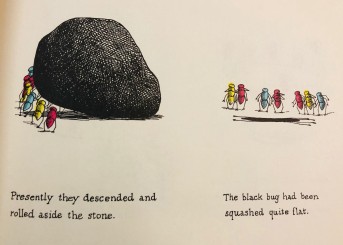 In The Bug Book, Gorey follows the lives of a family of delightfully cute and colorful bugs, and their murderous plot against the black bug who didn’t quite fit in with their lifestyle.

What makes a children’s book?

Despite the more mature themes of his illustrated poems and short stories, such as death/murder, violence, and alcoholism, his works are often regarded as being made for children. This poses a question of what makes “a children’s book,” an element explored throughout the works included in the Marsha Gontarski Collection. Do illustration-heavy works fall into the category of being “for kids,” simply due to our societal understanding that picture books are childlike in nature? Do children pay attention to the same themes and motifs that catch the eyes of adults? These questions are prevalent in the discussion around Gorey’s work, and can be asked again and again as we make our way through literature assigned to the genre of children’s books.

Two books Dr. Gontarski recommended for those examining this subject include The Uses of Enchantment: The Meaning and Importance of Fairy Tales by Bruno Bettleheim and Don’t tell the Grown-ups: Subversive Children’s Literature by Alison Laurie..

Although the season of ghosts, vampires, and bogeymen has ended, the spirit of the dark and disturbed doesn’t have to. Edward Gorey has a lot of works that we were unable to include in this post—be sure to come visit them in the Special Collections Reading Room, open Monday to Thursday, 10am – 6pm, or Friday 10am – 5:30pm. The reading room is on the first floor of Strozier Library. Gorey’s books, as well as so many other works using visual elements designed for children, are available in the Marsha Gontarski Collection.