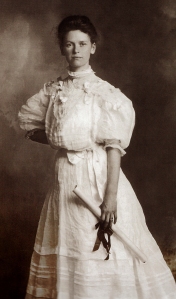 Ms. Nellie as she was often called, was one of the the first graduates of the Florida Female College, the year after Florida State College was changed from a short lived co-ed college to a women’s college due to The Buckman Act. Florida Female College was quickly renamed to the more fitting Florida State College for Women until 1947 when it became coeducational again and named Florida State University. Nellie spoke at the her graduation on Pestalozzi: His Influence on Public Education. She was married to Charles King, a teacher, principal, and superintendent of education for Jackson County, Florida. She was a prolific writer, and her over 1,000 letters and postcards describe her experiences in Tallahassee and surrounding areas, her relationships with family and friends from high school until 1940.

…You ought to be here to see all these girls. I think there are eighty-five in the dormitories, and you can imagine how much noise they make sometimes. In the whole school there are one hundred thirty-three girls, and how do you suppose we answer the roll call? Mr. Kettle the secretary, gets up and says “roll call,” and then the girls say 1-2-3 and so on to 133.

We had a very pleasant Thanksgiving, and had a delightful dinner, then held a little informal tea that night, and the girls all danced. Then Mrs. Bates invited us to her room and we had a little spread. You know we had lots of fun, all sitting around on the floor, singing songs, reciting, etc.