Florida State University Libraries Special Collections and Archives announce additions to the collection of the papers of Nobel Prize winner Paul A.M. Dirac — the father of modern physics. In May, his daughter, Monica Dirac donated new materials that will offer researchers further insight into the scope of Dirac’s life and work.

The new materials, most of which are from the early part of Dirac’s career, consist of family documents and professional papers, including letters, family photos, postcards, travel books, souvenirs, brochures, published materials, conference and event information, and legal documents.

The correspondence, especially that between Dirac and his wife Margit, discuss his travels, his career and colleagues, and their courtship. Other items, including postcards and travel brochures, document Dirac’s travel throughout the United Kingdom and United States as well as more exotic destinations. He visited Hungary, Margit’s homeland, often, as well as Germany, Denmark, and Sweden. He also made a few trips to the Soviet Union and Japan. 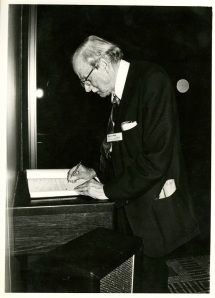 Dirac at a conference in Israel, 1979

This addition to the Paul A. M. Dirac Papers also includes a variety of materials relating to both Dirac’s death in 1984 and events that occurred after his death. In addition to condolence letters written to Margit, there are obituaries and articles about his life from newspapers and magazines all over the world. There is also information about conferences held and awards given in his honor, for example the Dirac Medal awarded by the International Centre for Theoretical Physics, and documentation of the opening of the Dirac Science Library here at FSU in 1989. These materials help to illustrate the lasting impact Paul Dirac had both at Florida State and in the international physics community as a whole. 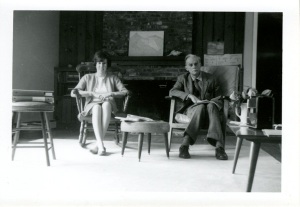 Paul Dirac and his daughter, Mary, in Stonybrook, NY, 1966

Dirac’s legacy lives on as students and faculty work in the Dirac Science Library and pass by his statue on campus. Despite being world-renowned for his work in physics, Dirac led a “rather opaque life,” according Graham Farmelo, author of “The Strangest Man: The Hidden Life of Paul Dirac.”  With the addition of these personal and professional papers to FSU Libraries Special Collections, researchers, biographers and scholars will have new avenues of insight into Dirac’s mind and work.

The new materials will be processed, preserved, and made available as a part of the existing Paul A.M. Dirac Papers at Florida State University. For more information on Paul Dirac and his papers, see the finding aid for the collection here.