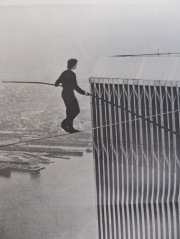 Thirty-eight years ago today, and six days before his twenty-fifth birthday, wire walker Philippe Petit began his walk between the two towers of the World Trade Center in New York City. “Those who saw him hushed.” [1]

In an undated interview from France Magazine that I found tucked between the pages of Mr. Petit’s On the High Wire, a book in our Harrison Sayre Circus Collection, Mr. Petit said he did not awake one day with a desire to be a wire walker. As a boy he liked to climb trees; it was an activity that gave him a great sense of solitude. And, “I like solitude,” he said.

“I like to be very close and very far away at the same time. I like to play with that distance. […] I like to create my own world. […] On the high wire, where the distance is real, I hear every noise; I know how to control the suspense. What I find beautiful and pure is to be single-mindedly committed to something, and when people pass by they are inspired by that single-minded commitment. That is how one learns; that is how life is enriched.”

Novelist Paul Auster, whose first memoir, The Invention of Solitude, was written between 1979 and 1981, wrote the translation of Mr. Petit’s On the High Wire, which was published in 1985. In his memoir, Mr. Auster speaks of his father seeing him only through the “mists of his solitude.” The August 7, 1974, morning wire walk of Mr. Petit had its own mist. Being close and far away at the same time – the study of it, the play of it – can lead to an outcome outside the limitations of distance. We can think of Mr. Petit’s incredible two-towers walk and Mr. Auster’s impressive collection of prose work following his initial exploration of the question of solitude and, indeed, find ourselves, linked by our humanity, both inspired and enriched.